The results are in for the winning book review commenters!
Check out the WATERCOLORS GALLERY for the results...
Well, now that the world has grinded to a halt with a global pandemic, it's a good thing you all gave us your favorite fabulous book recommendations in the blog comments on Biography in Children's Lit!  Now, if the book stores can stay open long enough to sell us each other's recommendations, we'll have something to read aloud together while we're all quarantined from work and school.
​
Get out the popcorn and blankets, people! Even chop some wood for the fire, and each family in their individual home can go back for a time, to a simpler world, when the Ma or Pa read aloud to the crew after dark. Hopefully we won't come to the point of candles...
​
​Here's our own current read-aloud pick for afternoon snack time: The Bronze Bow, by Elizabeth George Speare. My 10 year-old was so floored that it wasn't a contemporary story. He thought the characters were so fresh that when he asked what time it took place, and I told him, at the time of Christ--2,000 years ago, he stopped rummaging through the fridge, and said, "Really?!"

Check out the BLOG and leave us your own suggestions for your favorite biographies to captivate and inspire!
​ 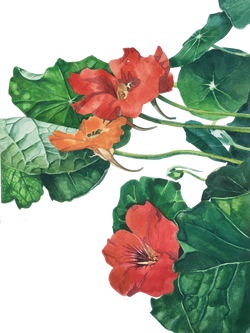 The Four-hour Challenge? Maybe Sixteen...
The prospect of painting makes me giddy. I love it! But it's also tedious, and takes time to set up the model, mix and match the colors to skin tones, and fabrics, and still find enough day light hours leftover to have the sun illuminate the subject after all the fuss. I'll admit, all of these elements (on top of stopping to feed oneself, and one's family) make for some burning in the shoulders. But seeing a rough sketch change and morph into a developed painting is so thrilling. More than anything, painting is just absolutely satisfying--watching a favorite subject appear that wasn't on the canvas hours before.

Recently, I signed up for a free month of Bluprint No, Bluprint has no idea I'm doing this (being the teensy ant in the termite mound of the art world that I am), so they did not endorse my free advertising on their behalf. Bluprint is just the only way possible to watch the series "Portrait Artist of the Year." Have you seen this cool sensation?

Sky Arts invites thousands of artist throughout the UK to submit their own self portraits (created in any medium) for the acceptance of a panel of three judges. Only a handful of artists are selected to paint a model in four hours. My husband and one of my daughters challenged me to paint a portrait in the same narrow window of time. I accepted the test, a little nervous to prove myself to them, as four hours is no time at all in which to wrap-up a painting in oils. (Especially after just getting back into the rhythm after a sixteen year hiatus...)

So I set up my model--that very daughter who was timing me--along with her inquisitive pet bunny, Jack. And having watched a few episodes of the show with me, my daughter clicked the timer on her watch and said, "Artist you may now begin!" Off I went--in a mad flurry of pigments and stubby, cheap brushes. At the half way point, when I was feeling I'd hardly just begun, my daughter's timer went off again, and she said, "Artist, you are now half way there!"

"No! I can't be!" The searing pain in my shoulders was settling--I could've fried eggs on my trapezius muscles! And then after what felt like only thirty more minutes, Micah announced (in a slightly British impersonation of Joan Bakewell): "Artist, your four hours is up. Put your brushes down!" WHEW!!! So after four hours of painting nonstop, this is only as far as I progressed (ha ha!): 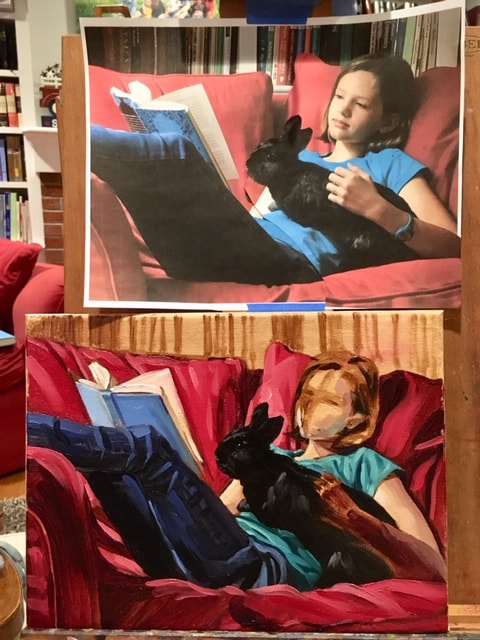 No face! But no worries. My husband and daughter were understanding. But I felt so determined to finish the portrait in one day. So I foolishly threw a few precious hours of sleep out the window (all while needing to get up at 5 with teens the next morning--UGH!), and felt at least a little better to complete the painting in one day--sixteen hours total. Oh well! Four times longer than the Portrait Artist of the Year painters. Doh! I've got a ways to go with practicing speed and proficiency!

So my goal is to complete at least two portraits a week until I can achieve a finished piece in four hours. Two friends have agreed to let me paint them in the coming weeks, and I'll be hounding more of you good people to pose, over the months and years. So maybe soon, I'll have more delightful portraits to post.

Here's a progression of shots of making the painting. The first one is staining the canvas with a nice middle-tone brown liquid made of two parts mineral spirits to one part Holbein Titanium white and burnt umber (so as to judge the color spectrum more clearly on the canvas).

Next it's time to arrange the model while my canvas is warming/drying in the oven (I try to avoid baking canvases except for when I forget to stain them the day before! EEK! Don't try this at home, folks. *Head shake...*). Then we arrange the pose by using a computer monitor with an enlarged photo, a printed copy of the photographed model taped to the easel, and the patient model in front of me for quick reference for an hour or so while I mix colors. Also below, you'll see a progression of shots as the piece was being painted, and as more color fills the pallet to block in areas of detail: 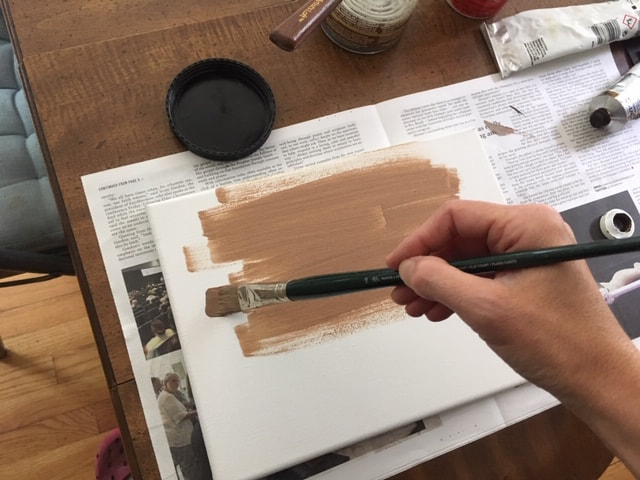 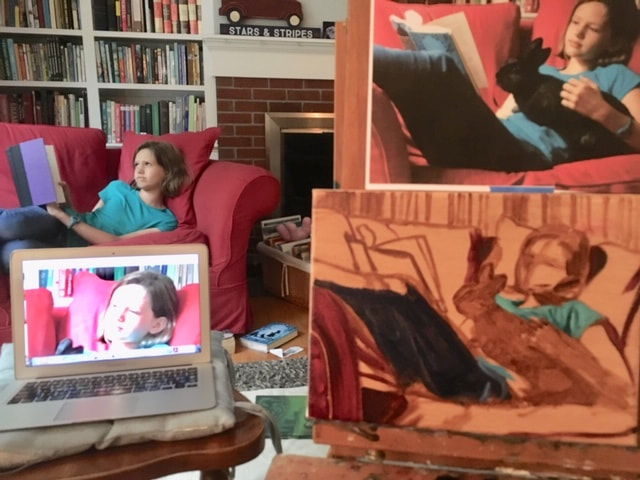 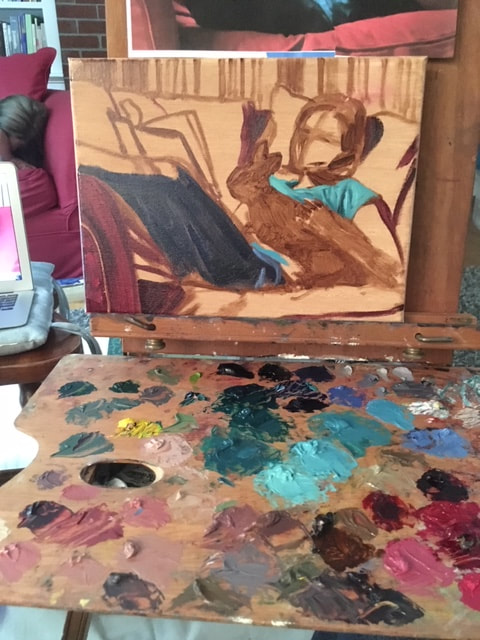 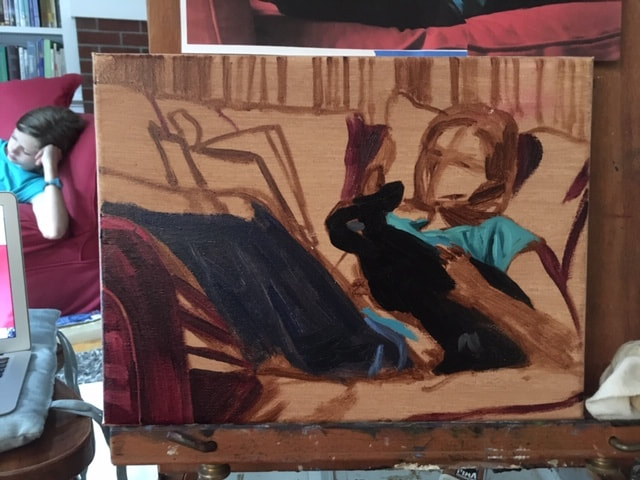 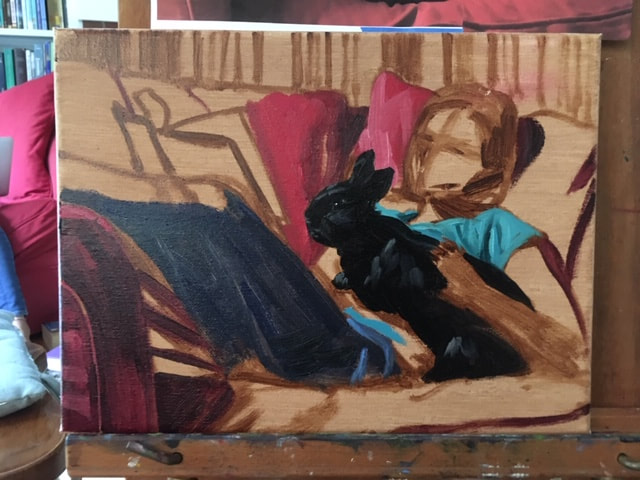 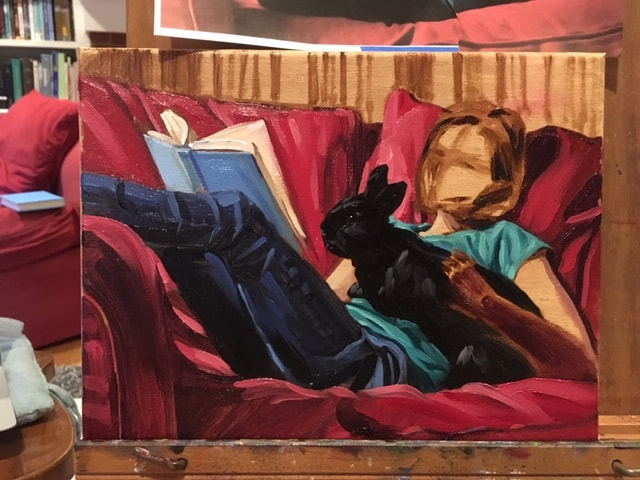 At the end of the four hours, I hadn't even reached the face yet. But that, my dear friends, is the pièce de résistance--getting to the dessert after the meal--saving the focus of the painting for last. Anyway, here's the finished piece after sixteen hours. Painting my daughter was a blast! And she actually liked the end result. Next time I'll go with less garish colors for the back drop, and just do a head study. Anyway, that's the process of living and learning. Now back to work for all of us! 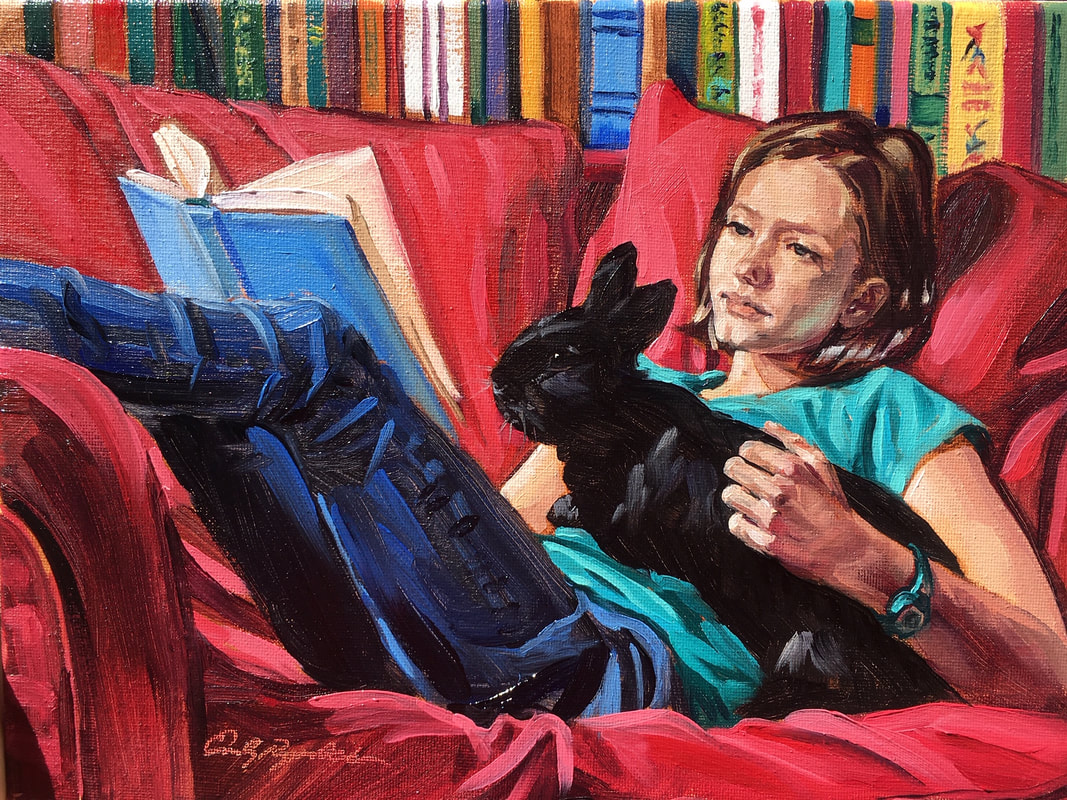